Metastatic castration-resistant prostate cancer (mCRPC) is an extremely severe disease that relentlessly evolves to death. Over the past few years, we have seen significant improvements in the different types of treatments available, which have positively impacted several clinical outcomes, including higher survival rates and better quality of life. Since Radium-223 approval by FDA in 2013, nuclear medicine has been incorporated to the therapeutic arsenal. Progress in this field have motivated a pursuit for new targeted therapies using radioactive isotopes. Recent reports addressing the first cases treated with this technique are impressive due to the high response rates obtained in refractory patients. Here we report the case of a patient with mCRPC who had been previously treated with several lines of anti-androgen therapy and cytotoxic chemotherapy, recently treated with PSMA labeled with the alpha-emitting radioisotope Actinium-225 (225Ac).

Prostate cancer is the second most frequent malignancy diagnosed in adult men in the world, with an incidence of 1,600,000 new cases and 26,700 deaths every year.(1) In Brazil, its occurrence is also the second highest, only behind of non-melanoma skin cancer. The Brazilian National Cancer Institute (INCA) estimates 68,220 new cases in 2018.(2)

The disease has several clinical scenarios, and the most advanced stage corresponds to the metastatic castration-resistant prostate cancer (mCRPC).

More recently, nuclear medicine has been playing an essential role in prostate cancer care. Some examples include the PET CT Scan with Ga68-PSMA as an accurate staging method and the efficacy of Radium-223 in controlling pain and improving over-all survival of patients with bone metastases.(3,4)

Alpha-emitting radioisotopes have high linear energy transfer (LET). Actinium-225 (225Ac) is an alpha emitter that can be labeled to the prostate-specific membrane antigen (PSMA) and used for treating patients with metastatic prostate cancer.(5) This strategy has huge therapeutic potential.

Here we report the case of the first Brazilian patient who had received treatment with 225Ac-PSMA-617 at the Heidelberg University, Germany.

A case report of an individual patient with metastatic castration-resistant prostate cancer (mCRPC) by means of medical records review.

ASC., male, 63 years old, was diagnosed with a locally advanced prostate cancer, which was surgically removed in July 2007. It was a Gleason 10 acinar adenocarcinoma stage pT3b pN1.(6) The tumor was present on both lobes and affected approximately 30% of glandular volume. It extended to seminal vesicles and periprostatic fat and spread to iliac lymph nodes. The initial PSA was 10 ng/mL. After surgery, patient initiated androgen deprivation therapy with the LHRH analog Goserelin and remained in biochemical remission for forty-eight months approximately.

As of the last quarter of 2011, the patient started showing progressive PSA elevations despite presenting a castration level of testosterone. The antiandrogen drug Bicalutamide was started and then, after its failure, diethylstilbestrol was combined to the LHRH analog. These strategies were maintained for approximately eighteen months.

In 2013, the patient had radiological progression and received external beam radiotherapy at a dose of 55 Gy to prostate bed and obstructing lesion across the left ureterovesical junction.

Successive progressions were seen over the months that followed and palliative care included several lines of treatment (Table 1). 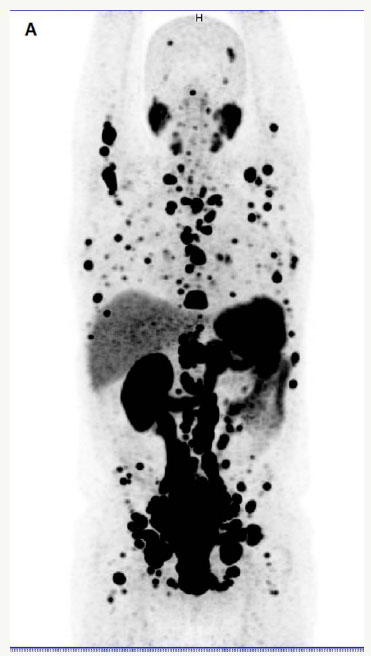 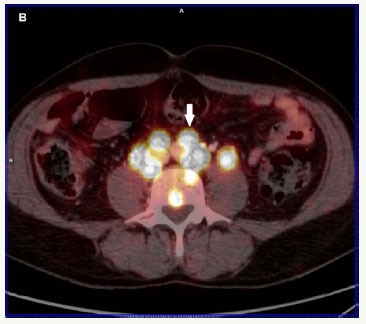 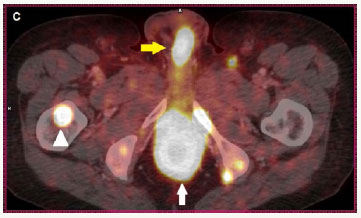 In September 2016, chemotherapy with cabazitaxel was discontinued in the face of a high risk of potentially severe clinical complications associated with chemotherapy myelotoxicity. At that time, the serum PSA level was 242.61 ng/mL.

Despite extensive local and systemic disease, the patient was in reasonable medical condition, with an ECOG performance status of 1.(7)

More recently, we became aware of articles from Heidelberg University reporting impressive responses to 225Ac-PSMA therapy.(8-10) With the patient’s consent, we decided to submit him to an appointment at the German university.

On September 30th, 2016, the patient underwent first cycle of intravenous 225Ac-PSMA-617 at a dose of 8 MBq. He was admitted to the inpatient unit of the University Hospital for 48 hours for cooling of larger salivary glands with thermal compresses. This procedure is intended to reduce xerostomia, which is expected with treatment, as these glands have a high physiological uptake of PSMA.(10) Despite this procedure, xerostomia is expected in virtually all patients(5) and it is frequently a lasting inconvenient side effect. Xerophthalmia also occurs for the same reason.(11) The patient had excellent immediate tolerance to treatment, and no immediate unpleasant effect was reported.

The patient was then monitored in Brazil with weekly clinical assessments and lab exams every two weeks, with special attention to renal function, electrolytes and blood cell count, as tumor lysis syndrome and myelotoxicity were our main concerns. In fact, the patient presented with tumor lysis syndrome and some myelotoxicity. Approximately 30 days after the application, on October 28th, 2016, we noticed tumor lysis, with the patient showing creatinine levels of 2.46 mg/dL (baseline 1.41 mg/dL) and hyperuricemia of 11.4 mg/dL (normal baseline). This side effect was managed according to the clinical protocol of our institution and no hospitalization was required. Myelotoxicity became a problem only after the second application, carried out on December 6th, 2016, with the administration of 6 MBq of intravenous 225Ac-PSMA. Hemoglobin, platelet and neutrophil levels reached nadir values of 7.9 g/dL, 118,000 platelets/mm3 and 915 neutrophils/mm3, respectively, approximately thirty days after the second cycle. The patient required transfusion support (10 mL/Kg of packet red blood cells) to treat fatigue related to anemia and granulocyte-colony stimulating factor (Filgrastim 300 µg for 3 days) in order to reduce the risk of infections.

The third cycle was administered on January 26th, 2017 (dose: 6 MBq), after which we accessed objective response of the treatment with PET/CT-Ga68-PSMA (Figure 2). 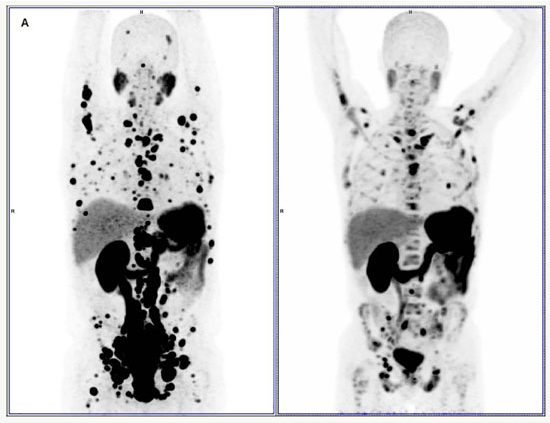 Figure 2A. Comparative PET/CT Scan with Ga68-PSMA, before and after 3 doses of treatment, Maximum Intensity Projection (MIP) images. To the right after 3 doses of Ac225-PSMA. The number of target lesions significantly reduced. 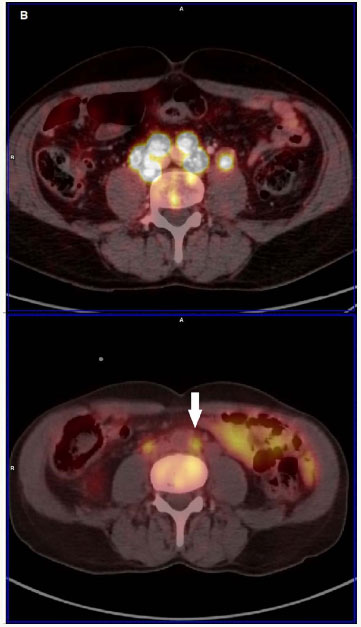 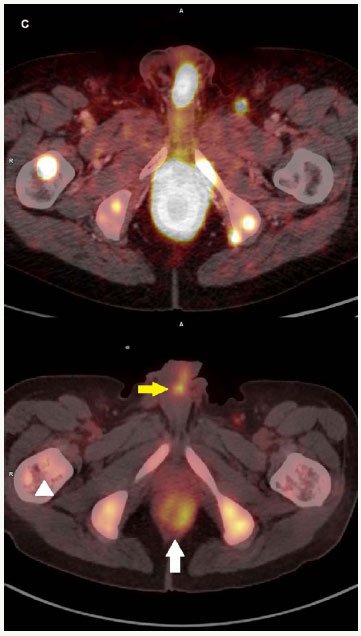 These images were jointly assessed with the colleagues in Germany and we decided for a fourth application, which occurred in May 2017 (dose: 6 MBq) in view of some persistent lesions still highly avid by PSMA.

The treatment has been completed and the patient is clinically well, active, with no neoplasm symptoms, with ECOG zero performance status. PSA, after peaking at 354.4 ng/mL 2 weeks after the administration of the first treatment dose (expected due to tumor lysis), was progressively declining. Currently, it is at 0.33 ng/mL level (Figure 3). The patient also had significant metabolic and radiologic responses assessed by a PET CT Scan Ga68-PSMA (Figure 4), performed approximately 2 months after the last dose. The patient has grade 2 xerostomia and xerophthalmia and uses artificial saliva and tears in addition to generous oral hydration. He keeps receiving Goserelin 10.8 mg subcutaneously every 90 days. 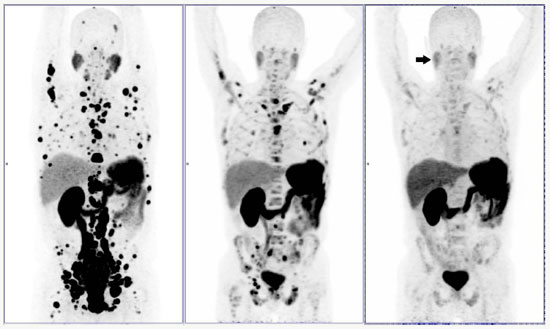 Patients with mCRPC currently have a considerable therapeutic arsenal at their disposal, significantly greater than the options available in the beginning of the 21st century. However, disease progression with clinical impairment and death are expected events. In this scenario, radioisotope targeted therapies appear as an interesting approach.

Lutetium-177 PSMA, a beta emitter, the first to be investigated, provided patients with a level of response that was unimaginable before, with up to 76% of objective response reported.(9) However, the beta particle emitted by this radioisotope has energy of 498 keV and tissue penetration of approximately 1.5 mm, which poses a considerable risk of myelosuppression when bone involvement is extensive. Additionally, its linear energy transfer (LET) is not high, and up to 30% of the patients experience failure during the treatment.(10)

Alternatively, alpha-emitting radioisotopes have features that post them as excellent therapeutic alternatives. High LET, low tissue penetration (up to 100 µm, only two to three cells in diameter) and proper half-life are some examples.

Alpha particles are heavier particulate emissions emanated from the nucleus of specific radioisotopes. Differently from beta particles, they go through a short linear distance when leaving the nucleus (only some cells in diameter) delivering a large amount of energy on their way. The effectiveness in destroying cells is attributed to its high LET even at concentrations much lower compared to those needed to reach the same effect with beta particles. High LET inside cell nucleus leads to irreparable DNA double helix damage, causing a variety of cell cycle events, such as cell cycle arrest, apoptosis and necrosis.(11)

One to three alpha particles going through the nucleus are needed to cause irreparable DNA damage and cell death. This makes alpha emitters 100 to 500 times stronger than beta emitters with low LET. Alpha particles do not depend on the generation of oxygen free radicals to cause cell injury. Therefore, tissue hypoxia is not a necessary condition, differently from beta particles.(12) In vitro comparisons between alpha and beta emitters (213-Bi and 177-Lu) coupled to somatostatin analogs (DOTATOC) have shown that alpha emitters are 4 times more capable to induce cell apoptosis.(11) Additionally, alpha-emitting therapy can overcome radioresistance in patients with refractory neuroendocrine tumors to treatment with Lutetium-177 somatostatin analogs.(13)

A major challenge related to alpha particles is the difficulty of production. We wish, as soon as possible, this obstacle is surpassed, allowing the studies using this highly promising technology achieve scale.

The 225Ac-PSMA in the treatment of patients with mCRPC is a reality, although still restricted to few centers in Europe due to the reasons mentioned before.

The initial results are extremely encouraging, and phase 2 trials are ongoing with great preliminary data. Some reports indicate 95% objective response rates and up to 20% complete tumor response in imaging assessments, which is absolutely impressive and unprecedented.(10)

Our patient has been free of conventional cytotoxic drugs for two years now. His quality of life has improved substantially, and he has maintained response for 22 months since beginning the treatment for his contentment and our fulfillment.

We do not know what to expect in the long-term. We still have many questions to be answered. When will the disease progress? What kind of neoplasm will come next? Will it be more aggressive? Will it be sensitive or resistant to hormonal strategies? We are also not familiar with potential undesirable effects in addition to xerostomia and xerophthalmia.

However, until we have the answers, we are comfortable to discuss this option with patients that have not responded to approved conventional therapies and whose clinical condition allow them to be potentially eligible to the strategy.