A 64-year-old female patient with uncompensated fever and secretive cough, an active smoker with a history of tuberculosis treated irregularly, developed non-small cell lung cancer such as squamous cell carcinoma in the pulmonary cavernoma.

Tuberculosis (TB) and Lung Cancer (LC) are two important causes of incidence and morbidity and mortality in developing countries. Estimates in the year of 2017 point to about 10 million people affected by TB and about 1,3 million deaths worldwide.1,2 In Brazil, in 2018, there were 72.788 new cases of TB, which represents an incidence coefficient of 34,8 cases/100 thousand inhabitants. Despite a slight reduction in the incidence of the disease, by 1% from 2009 to 2018, are still significantly higher than the goals of Strategy for Ending Tuberculosis proposed by the World Health Organization.3

In relation to LC, the World Health Organization (WHO) pointed to the year of 2016 approximately 1,7 million cases diagnosed in the world and in Brazil, for the same period, the estimate was approximately 17,4 thousand new cases in males and 11 thousand in females.4

Both TB and LC have clinical presentations that course with consumptive symptoms and radiological findings of pulmonary nodules. Thus, these pathologies constitute important differential diagnoses.5

Although the joint occurrence of these two pathologies is rare, about 2%,6 it is known that patients with tuberculosis have a two-fold increased risk of developing lung cancer.7

Thus, this work describes the case of a patient with epidermoid squamous cell carcinoma developed in tuberculosis infection scar.

Female of 64-year-old, rural worker, with history of secretive cough for 3 years, associated with unverified fever, especially in the afternoon/night period, of sporadic character and significant weight loss (she could not tell how much). History of active smoking and high smoking burden, using hand-rolled tobacco (1 pack of straw cigarette every two days) for about 45 years. After 2 years with the symptomatology, sought medical attention at the Primary Health Unit, where laboratory tests were requested, which showed no significant changes, bacilloscopy, positive in 3rd sample and chest X-ray with image suggestive of pulmonary tuberculosis (Figure 1). Was prescribed TB treatment, but without therapeutic adherence by the patient. 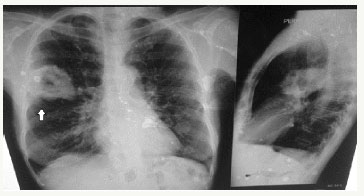 About 1 year later she sought hospital care complaining of chest pain, associated with coughing episodes with elimination of mucosanguinolent discharge and intense adynamia. After symptomatic control and realization of new control chest X-ray and Computed Tomography (CT) of the chest (Figures 2A and 2B), she was referred to the thoracic surgery service, in which performed bronchoscopy and biopsy of the lesion, whose result revealed lung fragments and bronchial mucosa suggestive of well-differentiated and invasive epidermoid squamous cell carcinoma, with foci of necrosis, associated with interstitial inflammatory infiltrate. After that, the patient was referred to the oncology service for clinical follow-up. 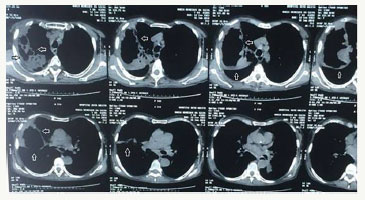 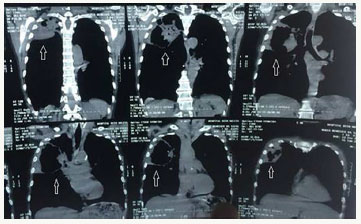 Lung cancer is the leading cause of cancer death in Brazil and worldwide, with about 1,3 million deaths a year. Tuberculosis is also an important cause of morbidity and mortality, especially in developing countries.1,2,4

The explanation for the development of lung cancer in patients with TB is commented by several authors, which state that some reactive oxygen or nitrogen species when released by activated neutrophils, can bind to DNA, inducing genetic damage and, finally, neoplastic transformation.8 This was evidenced in the fragile histidine triad gene in patients with chronic TB.9

Silva et al, demonstrated in their study that the moment of diagnosis can be defined in three phases: simultaneous TB and LC, 41,7%; TB before LC, 58,3%; and LC before TB, none case.10 The simultaneous or not occurrence of TB and LC in the same patient has been described in other studies. This association may vary according to the region and ethnic groups.7

Already radiological diagnosis has been a widely used method to evaluate both TB and LC patients. The chest X-ray is the initial method and CT is the follow-up method. A benign lesion may present with image of concentric or laminar calcification, diffuse or uniform, central and in "popcorn". Other types of calcification (eccentric and dotted), when identified, should be

considered potentially malignant. When assessing the morphology of nodular lesions, it is observed that most of those, larger than 2cm, constitute malignant nodules. In addition, malignant lesions are often illdefined, irregular and with spiky edges.12

Some authors suggest periodic follow-up with chest X-ray, bronchoscopy with biopsy and sputum cytology in patients recently diagnosed with tuberculosis to allow an early diagnosis of lung cancer.13 Others claim that the use of Endobronchial Ultrasound-Guided Transbronchial Needle Aspiration (EBUSTBNA) is a good option, considering that for TB it has a sensitivity of 85%14 and an accuracy of 93,9% for malignant diseases.15

In most of the studies observed, there was a greater association between TB and adenocarcinoma, something different from that reported above, which showed an association with squamous cell carcinoma. Another important factor to highlight is the history of smoking (active or in the past), whereas even after practice control there is still a 2,5-fold increased risk of cancer in TB patients.16

From this analysis, it highlights the importance of health actions regarding the orientation of patients diagnosed with tuberculosis regarding exposure to pulmonary carcinoid substances, such as smoking, as well as the adequate treatment of infection with the objective of increasing their overall survival and decrease the impact on public health.