Breast cancer is one of the most frequent type of cancer among women worldwide, as well as one of the most common causes of cancer-specific death.1 In Brazil, the most recent available data estimates 59.700 new cases of breast cancer in 2018, corresponding to 29,5% of all cancers diagnosed in women.2 Additionally, in 2015, breast cancer led to more than 15.000 deaths in Brazil. Today, due to improving treatment standards most women diagnosed with breast cancer have early disease and receive treatment with a curative intent.3 This improvement has been largely based on a better understanding of the molecular heterogeneity of breast cancer4 and the increasing number of new treatment options which leverage specific molecular targets.

The greatest example of this process is HER2-positive breast cancer, a subgroup comprising between 15-20% of breast cancer cases and with a particularly aggressive behaviour as well as poor prognosis.5 For HER2-positive disease, in both the early and advanced disease settings, prognosis has been substantially improved by the advent of trastuzumab, followed by 4 additional drugs collectively categorized as "anti-HER2 agents".

The anti-HER2 monoclonal antibody trastuzumab was approved for use in the early setting for 1 year on the basis of 4 pivotal phase III studies - HERA, BCIRG 0006, NSABP B-31 and NCCTG 9831.6-8 All 4 trials included an experimental arm with 1 year of trastuzumab, with HERA also including, additionally, an arm with 2 years of trastuzumab treatment. All 4 of these trials showed significant improvement in disease free-survival (DFS), a benefit that long term results have confirmed. Toxicity was mild, with cardiac toxicity being the only meaningful issue - though as detailed research on the topic has shown, mostly associated with concomitant or previous anthracycline use, older age and mostly consisting of asymptomatic reversible drops in LVEF.9

From the outset, adjuvant trastuzumab therapy presented a challenge to health care systems worldwide, particularly in developing countries. Initially approved in 2005 by the FDA, it is still not available in numerous countries. In Brazil, adjuvant trastuzumab was likewise approved in 2005 but only attained widespread availability in the public health care system in 2013. Though the costs associated with its use have been somewhat offset by the availability of cheap and effective biosimilar options, it remains a significant issue, partly due to treatment duration. This 1year regimen, empirically determined during the design of the original, trials has been challenged from the outset by researchers, particularly following the results of the FinHER trial.10

Unlike other trials, FinHER randomised patients between 9 weeks of trastuzumab and no trastuzumab.10 Results showed that 9 weeks of treatment already provided a significant improvement in outcomes (3-year relapse free survival {RFS} 91% {trastuzumab arm} vs 86% {control arm}, hazard ratio {HR} 0.58, 95% confidence interval {CI} 0.40 to 0.85, p=0.005). Later, the results of the 2 year arm of HERA showed no benefit from the extra year of treatment proved that there was a point beyond which further extension of treatment is no beneficial (8-year disease-free survival{DFS} 75.8% {trastuzumab 2 years} vs 76% {trastuzumab 1 year}, HR 0.99, 95% CI 0.85 to 1.14) p=0.86).11 Therefore, what is the actual necessary duration of trastuzumab treatment remained unclear and became the focus of large and expensive academic initiatives. Indeed, 5 separate academic trials were launched to test the hypothesis that reduced duration of treatment (9 weeks or 6 months) was non-inferior to the 1year approved standard. Table 1 summarizes the main efficacy and safety outcomes from these 5 trials. 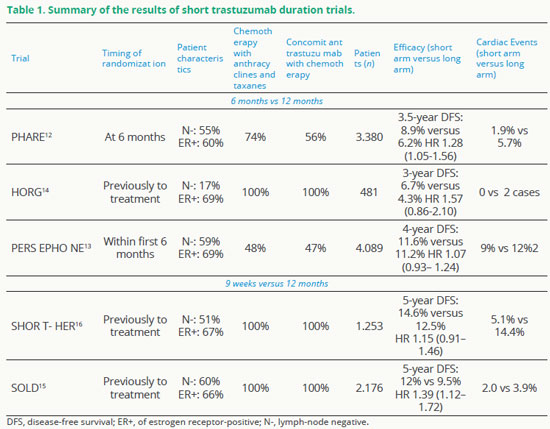 Totalizing 11.379 randomised patients, these huge parallel endeavours had until recently largely failed,12-16 to prove non-in feriority while years passed and the scientific debate in early HER2+ disease turned to other questions - notably the use of non-anthracycline chemotherapy regimens (the APT trial)17 and how to further improve outcomes via dual blockade (in the ALTTO and APHINITY trials)18,19 or via extending treatment duration with a different agent (in the ExTENET trial).20

PERSEPHONE, however, presented at ASCO 2018 and recently published has finally changed this situation.13 PERSEPHONE randomised 4,089 patients between 6 months of (neo)adjuvant trastuzumab vs 1 year of trastuzumab.

In order to bring this trial as close as possible to real life, PERSEPHONE was designed with large flexibility - including the possibility of opting between sequential trastuzumab vs concomitant trastuzumab + chemotherapy treatment, choosing the therapy backbone and, critically, to randomise the patient after trastuzumab had already been started outside of the trial up to the 6th month of treatment. Additionally, the non-inferiority study design means the establish ment of a non-inferiority threshold (which carries a certain level of subjectivity) - which was established in PERSEPHONE at 3% in terms of absolute loss in DFS. The 4 year follow up results for the primary outcome of DFS (89.8% in the 1 year arm vs 89.4% in the 6 month arm; HR 1.07, 90% CI 0.93-1.24, p=0.01) and for OS (94.8% in the 1 year arm vs 93.8% in the 6 month arm; HR 11.14, 90% CI 0.95-1.37, p=0.0006) favours the hypothesis that 6 months of therapy is non inferior to 1 year. Cardiac safety results, published at an earlier date, showed a reduction in cardiac events in the 6 month group (12% vs 9%).21 These efficacy result, after 4 similar failed tri als, need to be looked at in greater detail so that they can be integrated into the current consensus on treatment of early HER2-positive disease.22,23

Table 1 compares key characteristics of the population of these trials. As the table shows, in PERSEPHONE, a higher number of estrogen receptor (ER)+ patients were entered (notably as compared with PHARE) and a lower number of lymph node positive patients (as compared to HORG). 15% of the patients where neoadjuvant - which is significant as patients who are slower to respond, would be less likely to be enrolled into a de-escalation study, potentially inducing a significant bias (66% of patients were randomised after starting trastuzumab treatment). All of the points raised suggest that the success of this trial is partly based on a population that is slightly enriched for patients with better prognosis, as compared to the other trials testing the same hypothesis. It is also important to highlight that, from a statistical perspective, had PERSEPHONE adopted the same non-inferiority margin as PHARE (1.15), it would have failed to prove non- inferiority.

What can be concluded from PERSEPHONE results? It is undeniable today that a portion of patients with HER2-positive disease do not require 1 year of treatment. Identifying these patients, is however, more difficult, at least until an individual patient meta-analysis is performed. The subgroup analysis performed in PERSEPHONE, for the time being, show some interesting signals that should be taken into account when making de cisions. Patients receiving taxane only regimens benefit from the 1 year of treatment, and therefore the popular Tolaney regimen should not change with these results. Patients who receive neoadjuvant chemotherapy still seem to benefit from 1 year - and therefore this growing number of patients (considering the increased popularity of neoadjuvant treatment) should still receive 1 year of treatment, as should ER- patients. Patients with high-risk disease, who under current guidelines should be considered for either dual blockade with pertuzum ab (if ER-) or extend treatment with neratinib (if ER+) should also receive the entire year of treatment. Today, therefore, in settings in which all treatment options are available, the PERSEPHONE regimen should be considered for patients with disease that is neither eligible for the Tolaney regimen, not for pertuzumab/neratinib use. In developing nations, on the other hand, in which resources are scarce, the option of the PERSEPHONE regimen should be more strongly considered for a larg er number of patients; not only for the costs directly associated to the drug, but also for the reduction in use of scarce space for treatment application, specialized nurse and pharmacy time as well reduced costs related to cardiac toxicity and time out of work. To conclude, PERSEPHONE opens a new option for a subset of patients in developed countries and a rational cost-saving alternative for providing patients with trastu zumab in developing countries. The story of de-escalation of duration of treatment in trastuzumab, however, under scores the need for testing different treatment durations at registration and of the need of international collaborations when running academic de-escalation trials with non-inferiority designs.

Financial support: none to declare.

Conflicts of interest: The authors declare no conflict of interest relevant to this manuscript.